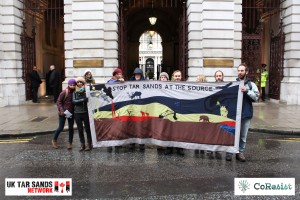 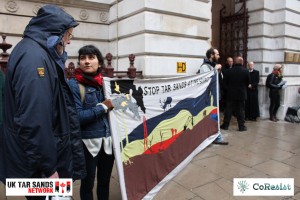 Tuesday November 18th, 2014. A coalition of climate and social justice organizations and artists held a silent presence and unveiled a large landscape which depicts the devastation caused by Canadian tar sands outside the Canada Europe Energy Roundtable this morning.

“Communities from across the UK have come together to make this banner to show our solidarity with those communities on the front lines of tar sands who have lived for generations in close relationship with the land” said Amanda Cid, a community artist “it is important to make visible the animal species and cultures that are being pushed to extinction because of decisions being made behind closed doors between industry and government.”

The Canadian government has embarked on a highly aggressive lobbying offensive to undermine the EU Fuel Quality Directive – which sought to reduce emissions from transport fuels in Europe – in order to open the door to tar sand imports.

“Government and industry have been promising to clean up the tar sands since I was a child,” said Melina Laboucan-Massimo, Climate and Energy Campaigner with Greenpeace Canada and a member of the Lubicon Cree First Nation in Alberta. “And here we are again with the Canadian government aggressively promoting tar sands oil in Europe, making false claims that the application of unproven technologies like carbon capture and storage can curb the emissions of carbon-intensive tar sands. Expensive techno-fixes like CCS simply prolong our addiction to oil and siphon resources away from the real solutions we need. The only way to solve this problem is to stop expanding the tar sands and start investing in clean energy solutions.”

As opposition to tar sands pipelines across Canada increases, the resource is steadily becoming landlocked with investors pulling investment out of major assets and projects being shelved such as Total’s Joslyn mine.“Today, the US Senate will make a key decision on whether to go ahead with the Keystone XL pipeline which would see imports of tar sands oil to Europe sky rocket” said climate justice campaigner Suzanne Dhaliwal. “At a time when we need global efforts to respond to climate change and a sharp u-turn to a green economy, Canada is aggressively undermining climate action, putting trade before transparency and force feeding highly polluting oil to international markets.”