The campaign to keep tar sands out of Europe

Soon, EU member states will vote on the Fuel Quality Directive (FQD) legislation, which will determine whether or not imports of highly-polluting tar sands oil will be discouraged. But fierce Canadian and oil industry lobbying of the UK and others means the vote may not pass. It is up to us to make our government do the right thing.

Our Keep Tar Sands Out of Europe website has the latest updates on the campaign and provides background information to help you understand what the FQD is and the aggressive lobbying done around it, including a convenient myths-buster. There is also information about the campaign, the coalition partners, more resources and what you can do to help. 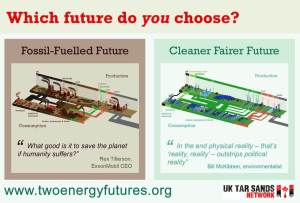 Our interactive infographic is a useful web resource, which brings to life two possible models of energy production and consumption for the year 2035. Based on latest research, it demonstrates that by 2035 everyone on the planet can have a high-quality lifestyle, fuelled by existing clean energy technologies.

The ground-breaking infographic, designed by Ken Turner and Daniel Sliwka and turned into an interactive website by Little Web Giants, allows users to visualise and explore these two energy futures in detail, learn about the impacts of different sources of fuel such as tar sands, biofuels and fracking, and bust the myths that we need fossil fuels to keep the lights on and allow poorer countries to develop. It aims to educate and inspire, and encourages users to write on an ‘Action Wall’ about what they are doing to bring about a cleaner fairer future, allowing groups and individuals to share campaigns, resources and ideas. 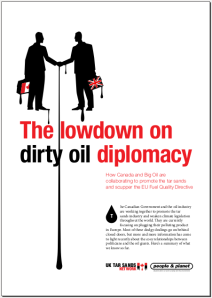 The lowdown on dirty oil diplomacy

How Canada and Big Oil are collaborating to promote the tar sands and scupper the EU Fuel Quality Directive In recent years the tar sands industry (they call themselves ‘oil sands’ – as if that sounded any cleaner!) has attracted growing public awareness, criticism and resistance. This is due to their highly polluting and destructive nature. In late 2009, anticipating that Europe might be a key site of opposition and potential embarrassment, the Canadian government set up what it called the ‘Pan-European Oil Sands Advocacy Team’. Its mission? ‘To reframe the European debate on oil sands in a manner that protects and advances Canadian interests related to the oil sands…in Europe’.

Most of these dodgy dealings go on behind closed doors, but more and more information has come to light recently about the cosy relationships between politicians and the oil giants. Here’s a summary of what we know so far. Download Dirty Diplomacy report 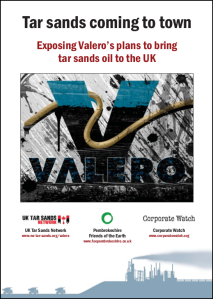 US-based Valero Energy is the world’s largest independent petroleum refiner, and has an appalling environmental record, including a heavy involvement in tar sands. Valero is also a key supporter of the proposed Keystone XL tar sands pipeline, and has a number of refineries near the proposed finish of the pipeline. Valero plans to use to these Gulf Coast refineries to export diesel to Wales, where it recently purchased Pembroke refinery.

While the EU Fuel Quality Directive sits in limbo, more and more of the diesel Valero brings to the UK could be from the tar sands. But stopping the industry from expanding into Europe is essential in the battle to keep the oil in the ground. 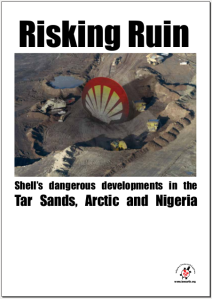 As economic austerity bites, major oil companies are making staggering profits. A high oil price in 2011 made Shell $30.92 billion in annual net profits, equivalent to $2 million per hour. Chevron came close behind and despite numerous setbacks, BP made a cool $25.7 billion. Most of these profits came from finding and extracting oil and gas. Yet the core activity of these companies is unsustainable. As profits soar, communities, the environment and the climate are paying an unreasonably high price.

This report raises key questions about Shell’s planned expansion in the Canadian tar sands and the Alaskan Arctic. What are the costs to society and environment? Who bears the risks? Could the political and legal climate ultimately render these ‘frontier oil’ projects uneconomical? These risks form part of a much wider picture of Shell’s low health and safety standards, inadequate environmental management and underinvestment in the maintenance of infrastructure. All this contributes to a long history of global environmental devastation. 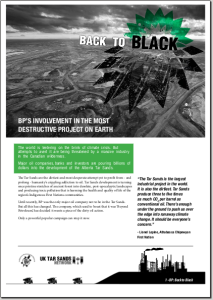 The world is teetering on the brink of climate crisis. But attempts to avert it are being threatened by a massive industry in the Canadian wilderness. Major oil companies, banks and investors are pouring billions of dollars into the development of the Alberta Tar Sands. The Tar Sands are the dirtiest and most desperate attempt yet to profit from – and prolong – humanity’s crippling addiction to oil. Tar Sands development is turning once pristine stretches of ancient forest into desolate, post-apocalyptic landscapes and producing toxic pollution that is harming the health and quality of life of the region’s Indigenous First Nations communities. Until recently, BP was the only major oil company not to be in the Tar Sands. But all this has changed. The company, which used to boast that it was ‘Beyond Petroleum’, has decided it wants a piece of the dirty oil action.

In 2007, BP took the decision to move into Tar Sands in a big way. In partnership with Husky Energy, a Canadian company, it announced the ‘Sunrise Project’, an extraction project that could produce 200,000 barrels per day.When the financial crisis hit and the price of oil crashed in 2008, BP put the project on hold. Then in December 2010 BP announced it intended to go ahead with the project, and invested £1.6 billion in the ‘development phase’. But it will be another four years before the oil flows – so there is still time to stop it. 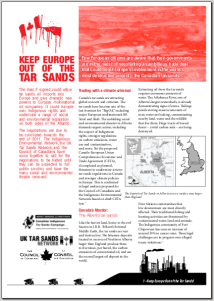 Few European citizens are aware that their governments are in the midst of negotiating an ambitious trade deal that could boost Europe’s involvement in the world’s most destructive project – the Canadian tar sands.

Faced with stalled trade liberalization talks at the World Trade Organization (WTO), Canada and the EU set out in May 2009 to negotiate a broad free trade agreement. The Comprehensive Economic and Trade Agreement, or CETA, as the deal is often called, would be far more ambitious than the Doha round of negotiations at the WTO, or any other free trade deal the EU or Canada have ever signed. The deal could allow tar sands oil imports into Europe and give dramatic new powers to Europe’s multinational oil companies. It could trample over Indigenous rights and undermine a range of social and environmental legislation on both sides of the Atlantic.

The negotiations are due to be concluded towards the end of 2011. The Indigenous Environmental Network, the UK Tar Sands Network, and the Council of Canadians have come together to call for the negotiations to be halted until they can be subjected to full public scrutiny and have the many social and environmental threats removed. 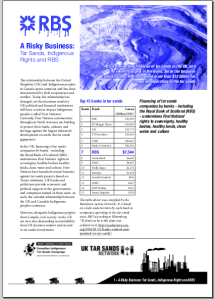 RBS is the leading financier of tar sands in the UK, and the seventh largest in the world. Since the taxpayer bailout in 2008, RBS has raised more than $12 billion for companies operating in the tar sands. Taxpayers have handed over $53.2 billion to RBS since the bailout and the UK public is now the largest shareholder of the bank, with an 83% majority stake. Yet the public has had little input into financial decisions made by the bank. Indeed, there has been vocal opposition from politicians, civil society groups and the business community regarding the banks lending practices following reports of human rights and environmental abuses linked to RBS financing.

In the first six months following the 2008 bailout, RBS raised over $16.2 billion for the fossil fuel industry including companies operating in the Alberta tar sands. Specifically, RBS underwrote $8 billion in loans to ConocoPhillips between 2007-2009. ConocoPhillips is heavily invested in the tar sands through a tar sands refinery and both sub-surface ‘in situ’ mining and surface mining projects. In 2008, ConocoPhillips was named in a lawsuit launched by the Beaver Lake Cree Nation in Alberta for developing on the Indigenous community’s traditional lands without proper consultation. 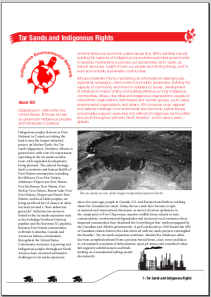 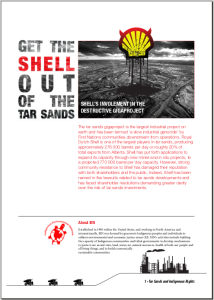 The tar sands gigaproject is the largest industrial project on earth and has been termed ‘a slow industrial genocide’ by First Nations communities downstream from operations. Royal Dutch Shell is one of the largest players in tar sands, producing approximately 276 000 barrels per day or roughly 20% of total exports from Alberta. Shell has put forth applications to expand its capacity through new mines and in situ projects, to a projected 770 000 barrel per day capacity. However, strong community resistance to Shell has damaged their reputation with both shareholders and the public. Indeed, Shell has been named in five lawsuits related to tar sands developments and has faced shareholder resolutions demanding greater clarity over the risk of tar sands investments.

During Shell’s 2010 AGM, Co-operative Asset Management and 141 other institutional and  individual shareholders raised “concerns for the long-term success of the company arising from the risks  associated with oil sands.” 11% of Shell shareholders supported a resolution asking Shell to publish details of the environmental, social and financial risks associated with their tar sands developments. 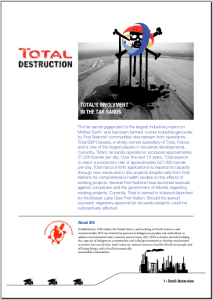 The tar sands gigaproject is the largest industrial project on Mother Earth1 and has been termed ‘a slow industrial genocide’ by First Nations communities downstream from operations. Total E&P Canada, a wholly owned subsidiary of Total, France and is one of the largest players in tar sands developments. Currently, Total’s tar sands operations’ produces approximately 27,000 barrels per day. Over the next 10 years, Total expects to reach a production rate of approximately 627,000 barrels per day. Total has put forth applications to expand its capacity through new mines and in situ projects despite calls from First Nations for comprehensive health studies on the effects of existing projects.

Several First Nations have launched lawsuits against companies and the government of Alberta regarding existing projects. Currently, Total is named in a lawsuit launched by the Beaver Lake Cree First Nation. Should the lawsuit succeed, regulatory approval for tar sands projects could be substantively affected. 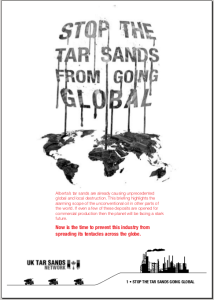 Tar Sands Around the World

Alberta’s tar sands are already causing unprecedented global and local destruction. This briefing highlights the alarming scope of the unconventional oil in other parts of the world. If even a few of these deposits are opened for commercial production then the planet will be facing a stark future. Now is the time to prevent this industry from spreading its tentacles across the globe.

Despite growing worldwide opposition to tar sands, the industry still appears lucrative for multinational oil corporations and governments. Worryingly, we are now seeing tar sands deposits in areas outside of Canada starting to be explored. This expansion of the tar sands industry is driven by a decline in conventional oil resources, a rise in oil prices, and the perception that demand for oil will rise indefinitely. This dangerous prediction wrongly assumes minimal or non-existent government legislation on climate change.