We wanted to get in touch to send a massive shout out to everyone who has been a part of this incredible movement to stand by the Water Protectors at Standing Rock! All of you out there who have been doing Divest DAPL actions, organizing events, fundraisers, solidarity actions, calling decision makers, the country sheriffs, and more! 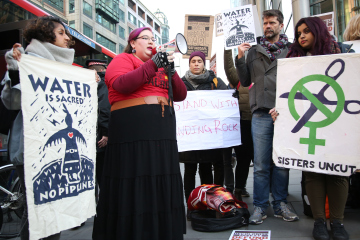 For those of us watching from afar, it has been painful to see close friends and the communities we have organised with for years being brutalised by the police – and yet remaining peaceful, ultimately stopping the Dakota Access Pipeline, for now!

Despite this recent victory, we must remain vigilant and keep our attentions focused on what is happening in Standing Rock. The horrific police oppression towards indigenous peoples we’ve witnessed there is an ongoing story, which is sadly a daily part of confronting the violence and brutality of the oil economy. We must continue to build this movement of solidarity – between our women here and the women on the frontline – to protect the water in Standing Rock, and across our Mother Earth.

The call for people to physically go to Standing Rock has been halted for now – but the call to divest and take our money out of the oil industry, and to transition away from destructive fossil fuel projects as a society, is not. Keep building those connections and doing whatever you can from where you are, and tocontinue to learn more about indigenous resistance movements and how you can be an effective ally.

With the handover to a new U.S. administration on Jan 20th fast approaching, it is essential that we starve the Black Snake of capital. Keep doing those bank actions! We are winning but, with Trump set to enter into power, we must use this recent victory to galvanise and grow our movements.

We know there are many heads to the Black Snake – from the Dakota Access Pipeline, to the Tar Sands, to the Gulf and the Arctic – and we must not lose this incredible momentum! Let’s take inspiration from what just happened, take care of each other, and make time for self care: because this is just the beginning. Let’s keep it up!

As allies we need to continue to keep educating ourselves about settler colonialism – and for white allies, also to learn how to be active in dismantling white supremacy by recentering our climate movements around POC in the UK, and around the people on the frontlines of environmental racism globally. Shout out to Sisters Uncut, Black Lives Matters UK, London Mexico Solidarity, London Latinas, The Wretched of the Earth, Movimiento Jaguar Despierto and individual allies for for coming together.

Despite the lack of resources that flow to POC doing frontline solidarity work in the environmental movement in the UK, we pulled together some of our best actions and movement building thanks to friends and family. We thank everyone who recently pitched in money to keep our efforts going over the upcoming Christmas period. If you haven’t donated yet, please know a little goes a long way! ? Continue to encourage friends and family to keep donations going to Standing Rock throughout the Christmas period too. As we continue to build our decolonised environmental justice movement in the UK, let’s keep coming together, learning from each other, and pooling our resources and creativity.

We need to keep prioritising/recentering the voices of the Indigenous people in our work – not just ‘helping out’, offering aid, or ‘coming to their rescue’ – because it is they who are leading the most powerful climate justice movement today. The recent denial of the easement to DAPL is the victory of Indigenous leadership. The entire movement to stop DAPL is testament to the sophisticated strategies of Indigenous movements. The commitment to peaceful non-violence by the Standing Rock Sioux Tribe in the face of police brutality, is inspiring to building a global non-violent movement rooted in spiritual direct action. We are inspired by the genius legal leap-dancing of indigenous campaigners from Honour the Earth, and the commitment, creativity, and sense of humour of Indigenous Rising Media and Indigenous Environmental Network.

This movement is an inspiration to all of us fighting the fossil fuel industry, and it’s been awesome to play our small part in it all with you!

See you on the streets!