As the business case for tar sands extraction falters, Arctic drilling is suspended, and the company is investigated for price fixing, Shell’s board will be under pressure to defend the direction it is taking at its AGM in The Hague on Tuesday 21 May. You can watch a live webcast of the event if you register.

Eriel and Mae in the Netherlands, preparing to take on Shell tomorrow!

Two Indigenous women, representing communities impacted by Shell’s operations abroad, will attend the AGM to confront the Chairman and Board over the massive human and ecological rights violations and economic devastation that the company’s operations bring to Indigenous communities. They will argue that Shell’s decision to pursue highly risky ‘extreme energy’ projects, like Arctic drilling and Canadian tar sands, will have little long term benefit for the company, and expose it to both reputational damage and political risk, including litigation.

One of the communities represented, the Athabasca Chipewyan First Nation (ACFN), which resides downstream from tar sands operations, is currently suing Shell for violating past agreements that have threatened their treaty rights. The community is also actively opposing two new tar sands mines Shell is proposing to develop on their land. For more details, watch the powerful film above. Legal challenges by other First Nations against tar sands extraction on their traditional territories is also increasing.

“Shell’s current and proposed tar sands projects violate terms of our treaty, destroy our land and contaminate waters critical to our survival. The ACFN leadership has made a commitment to protect our lands, rights and people currently being threatened by tar sands development. We have tried exploring amenable agreements and options with Shell only to be disappointed by their inability to compromise and adjust proposed plans to adequately work with us which has led and continues to lead toward litigation. Our culture, lands and rights can no longer stand for unabated and irresponsible development of tar sands in the region by Shell or any operator.”

Shell is also under fire for its Arctic operations. The company has spent $4.5bn securing permits to drill in Arctic waters. However it has been proven incapable of operating in the area and has had to suspend its plans for drilling this summer.

“The Beaufort and Chukchi Seas are critical to the Inupiaq culture and traditions, and provide a vital habitat for the endangered bowhead whales, beluga whales, polar bears, walruses, seals and migratory birds. If an oil spill were to occur in the Arctic’s extreme conditions, there is no proven method to clean it up during Winter. Shell is taking a deadly risk with Inupiat and other Arctic Indigenous peoples’ cultures and food security for shortsighted profit, while the community faces long term consequences to their survival.” 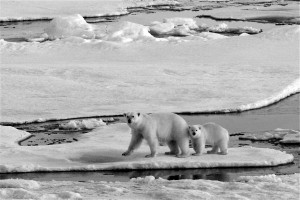 Shell wants to drill in the Beaufort and Chukchi Seas, which provide a vital habitat for polar bears as well as many other endangered species. Photo by Martha de Jong-Lantink.

In addition, the UK Tar Sands Network is bringing concerns to Shell’s shareholders over other long-term risks to the company’s investments in tar sands.

The tar sands are landlocked, making them difficult and expensive to get to market. The pipelines that present the industry’s only viable solution to this problem – such as Keystone XL and Enbridge Northern Gateway – are facing massive public opposition, and look unlikely to be built soon. The price of tar sands crude has dropped as a result. Meanwhile, in Europe, the Fuel Quality Directive (FQD) is likely to strongly discourage future tar sands imports https://www.no-tar-sands.org/files/2013/05/20/into europe. lax standards and lack of adequate environmental regulation have led to several high-profile leaks and spills in recent weeks, including the flooding of an arkansas suburb with tar sands oil. meanwhile, a recent report by the carbon tracker initiative identified an alarming ‘carbon bubble’, arguing that 80% of oil companies’ current fossil fuel reserves are ‘unburnable carbon’, and anticipating a crash in prices as climate regulations kick in.

In March, French oil giant Total pulled out of one of its three Canadian tar sands projects, citing the high costs and fragile profit margins that are besetting the whole industry. Total was willing to take a $1.65 billion loss rather than press ahead with what has become a bad investment.

Shell will also be criticised by UK campaigners for heavily lobbying the UK government against the labelling of tar sands as highly polluting in the Fuel Quality Directive. Shell was revealed to have a close relationship with its former Chief Economist, now Secretary of State for Business and Industry and official ‘Minister for Shell’ Vince Cable, in a letter published last year. The letter urged him to harden the government’s line against the FQD, a move which was revealed to have happened in leaked documents published last week. 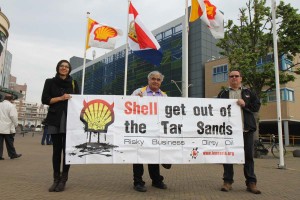 Representatives from Indigenous communities in Canada and the Arctic attended Shell’s AGM last year, but did not feel their concerns were taken seriously. Photo by Ben Powless.

“The risk factors that recently led Total to ditch a major tar sands project are increasing. The tar sands are landlocked and expensive, and opposition to new pipelines has led the price of tar sands crude to drop. Meanwhile, the industry’s high emissions mean that Canada’s oil is increasingly looking like ‘unburnable carbon’. Despite Shell’s frenzied lobbying, upcoming EU legislation on transport emissions could close off this key future market and set a precedent that other countries will follow. Shell should ditch its expansion plans before the carbon bubble bursts, exposing its shareholders to financial disaster.”