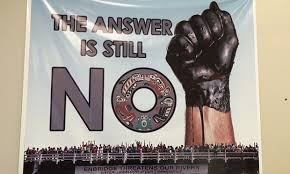 Wow, what a result. Last night, new Canadian Prime Minister Justin Trudeau and the Liberal party swept to victory with a clear majority of 184 seats and 54% of the vote. Conservatives won 99 seats and 29% of the vote. NDP 44 seats, 13%. Greens 1 seat, 0% vote (source Canadian Press).

With so much at stake (four more years of a brutal and paranoid petro-government, argh) it felt too much like tempting fate to crack jokes but at the same time we felt like the tension sorely needed breaking on election night. That’s where Vice Canada totally saved us with a livestream of its #VICEelxnCircus show. As the polling stations began closing and results began trickling in, their editorial team delivered all the key, informed analysis we wanted, but also plenty of goofing about to take the edge off things. Here at UKTSN, we joust with powerful men wearing suits at the BP and Shell annual shareholders meetings (and we all know what they’re capable of!) so we don’t necessarily need to see suits on commentators for us to discern our own opinions from the information being conveyed, those days are long gone. Also, when we were tuned in at least, Vice Canada pundits discussed indigenous issues, which is something that was very clearly missing on many news outlets, especially international coverage. Congrats, Vice Canada!

We found that Stephen Harper and his Conservative party fought an extremely cynical and frankly patronising election campaign. The whole niqab thing was a blatant red herring and we totally saw through that distraction ploy. Haroun Bouazzi, leader of the muslim society in Montréal told BBC Pop Up recently, “here in Québec (population 8.25 million) we have around 50 women wearing the niqab, 0.0006% of the population. We have to face the real problem, where you have north African people who are very well educated, that know French, that have a 20% unemployment rate, more than three times the average in Québec.” These women go into a private room and unveil their faces when they pledge allegiance anyway, meanwhile there are many pressing First Nation issues that deserve this airtime so let’s move on.

Today, we eagerly await post election analysis by various medias and the anticipation as Trudeau chooses his cabinet, to build. Harper turned Canada into a country pivoted on resource extraction and muzzled scientists at a key moment in history, so careful analysis by carbon keepers and environmental news desks will be key. Follow our twitter feed @NoTarSands where we’ll be reposting the best of what we find. To note, 350 Canada, are planning a ‘climate welcome‘ for the new Prime Minister, November 5-8, which we wholeheartedly endorse, so check that out.