Rise Up from Nancy Boulicault on Vimeo.

Activists outside the US Embassy in London surrounded a model of the White House to protest against the proposed US Keystone XL pipeline. Holding banners that read “Obama NO!” and “Tar sands is blood oil”, the action corresponded with 6000 people in Washington DC surrounding the White House to urge Obama to reject the proposed 1600-mile pipeline that would take tar sands oil from Alberta to the US Gulf Coast. [1]

“The Keystone XL pipeline would entrench our reliance on a particularly dirty fossil fuel which is devastating communities,” said UK Tar Sands Network campaigner Suzanne Dhaliwal. “As we speak, First Nations in Alberta are having their way of life destroyed, with forests being clear cut, animals poisoned, and rare cancers now rife in the community. We cannot afford to further expand the tar sands – they are a climate disaster, with the potential to increase the atmospheric carbon concentration by 200 ppm.” [2]

The Keystone XL pipeline has faced a raft of opposition in the US from a variety of fronts, with climate activists, farmers, First Nations and even the government of Nebraska, all coming together to persuade Obama to reject the pipeline. [3] In August and September, a series of protests outside the White House resulted in 1,253 arrests and has seen the issue flooding the media. [4]

The likely environmental impacts of the pipeline have been vastly downplayed. The US Environmental Protection Agency notes that the project could yield an extra 1.15 billion tons of GHGs, but this has been ignored by the US State Department’s own Environmental Impact Statement. Transcanada’s other pipelines have been leaking on average at one spill per month. A rupture in the Keystone XL pipeline could cause a BP-style oil spill – devastating the entire area, and contaminating the source of fresh drinking water for 2 million people. [5]

Dhaliwal continued, “We are standing in solidarity today with the Lakota Nations in the US who oppose this pipe going through pristine water sources. [6] President Obama recently signed onto the UN Declaration of Rights for Indigenous People’s. He cannot uphold that commitment by approving this pipeline.”

The US pipeline decision comes at a time when the EU is also considering the future of tar sands. The proposed Fuel Quality Directive [7], which would strongly discourage tar sands from entering the EU, has been repeatedly stalled by the UK government, largely as a result of incessant Canadian lobbying. [8]

Emily Coats, also from UK Tar Sands Network, commented, “We are particularly concerned about the Keystone XL pipeline here in the UK, because US companies are already expressing their desires to use the pipeline to bring tar sands oil to Europe. [9] Given the UK government’s reluctance to embrace legislation that would prevent that, it is even more important that the pipeline does not get built, so we can stop the flow of this dirty oil at its source.” 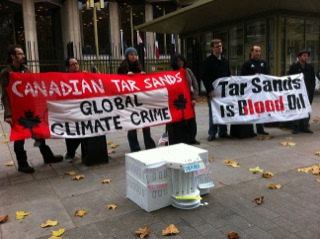 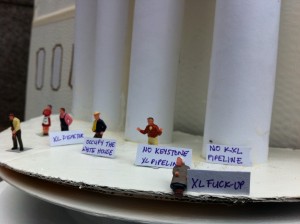 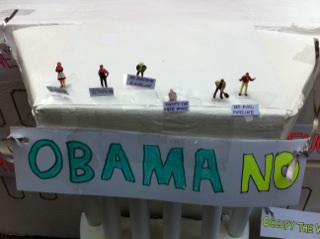 [1] One year from the next election, US activists return to DC to try to encircle the White House to ask President Obama to reject the Keystone XL tar sands pipeline. The action begins at 2 pm in Lafayette Park. http://www.tarsandsaction.org/

[3] The decision of whether to approve the pipeline technically lies with the US State Department, but Obama has the opportunity to intervene if he wishes. Recent news has indicated that Obama intends to step in and take responsibility for the decision. See http://www.tarsandsaction.org/turning-point-president-obama-comments-keystone-xl/

[6] The Fort Laramie Treaties, guaranteed by the US Constitution, secure the lands of the Lakota Nation for the Lakota People. The tar sands Keystone XL oil pipeline would pass through these lands while crossing the Ogallala Aquifer, one of the world’s largest, which supplies fresh water to the surrounding reservations as well as eight US states. http://www.truth-out.org/lakota-tribes-refuse-cooperate-tar-sands-proponents/1320241082

[7] The Fuel Quality Directive aims to reduce the EU’s transport emissions by 6% by 2020, by distinguishing certain fuels with an average value of carbon-intensity. The EU Commission has approved a currently proposal that would give carbon values to a number of unconventional fuels, including tar sands, oil shale, and coal-to-liquid. Member states will vote on the proposal in December.

[8] The Canadian government has been lobbying the EU and especially the UK for a number of years, to reject the legislation as ‘discriminatory’ and ‘unscientific’. Most recently, Natural Resources Minister Joe Oliver was sent to LSE to give a public lecture pushing the future of tar sands and speaking out against the Fuel Quality Directive. See www.vancouversun.com/business/Minister+challenged+British+students+during+oilsands+tour/5581538/story.html See also http://www.foeeurope.org/publications/2011/FOEE_Report_Tar_Sands_Lobby_Final_July82011.pdf for more examples of lobbying.

[9] US refining company Valero has told its shareholders it intends to use Keystone to export tar sands oil to markets including the UK. See www.no-tar-sands.org/2011/09/tar-sands-on-fast-track-to-the-uk/ for details.