Royal Dutch Shell Spills Over 88,000 Gallons of Crude Oil in the Gulf of Mexico 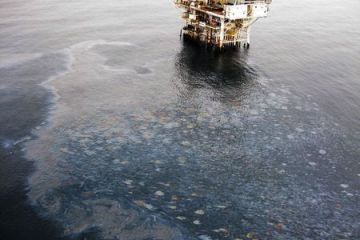 New Orleans, LA – On thursday, an 88,200 gallon oil spill was discovered in the U.S. Gulf of Mexico, forcing Royal Dutch Shell to shut in all wells that flow to its Brutus platform.

An oil sheen 2 miles wide and 13 miles long, 2100 barrels equal to 90,000 gallons (or at least thats what being reported), from a Shell owned leaky pipeline, 2900 feet below the waters of the Gulf of Mexico.

The U.S. Bureau of Safety and Environmental Enforcement (BSEE) said an oil sheen 2 miles wide by 13 miles long was visible in the sea about 97 miles off the Louisiana coast. The spill occurred 2900 feet below sea level.

This Sunday, thousands will mobilize in Washington, DC as a part of the “Break Free From Fossil Fuels” movement happening across the globe, demanding the Obama Administration to protect the waters of the Arctic Ocean and the Gulf of Mexico from new fossil fuel developments and offshore drilling.

Representatives from Gulf Coast and Alaska communities will be speaking at the rally in front of the White House on Sunday. For more info about the rally please look for info here: https://dc.breakfree2016.org/

In response to the news of the spill, the Indigenous Environmental Network released the following statements:

Tom Goldtooth, Indigenous Environmental Network Executive Director: “Yet again the Gulf Coast experiences an oil spill, meanwhile the White House administration continues to lease federal public lands for more fossil fuel development. This does not demonstrate the leadership needed to addressing climate change. This is business-as-usual with frontline communities of the Gulf Coast paying the price; Mother Earth is paying the price. We implore the President of the United States to listen to the thousands of people who will be in Washington, DC this Sunday demanding the protection of our sacred waters and a moratorium on new offshore drilling.”

“Multinational corporations continue to drill off our coast, while the federal government is putting more offshore lands onto the auction block than ever before. This is absurd. The only way to ensure we protect the water and sanctity of life in and along the Gulf Coast is to put an end to extreme fossil fuel development. Oil and gas infrastructure, from pipelines to wells to refineries, are gambling with the health of our environment and the wellness of our communities along the coast. We need immediate action to facilitate just transitions and the ability to ensure we keep carbon in the ground for our communities across the Gulf and for communities around the planet.”

“In Alaska, we are relieved that Shell Oil has decided not to pursue drilling in the Chukchi and Beaufort Seas of the Arctic Ocean. We fought hard to keep Shell Oil out of the Arctic. As such, we in Alaska stand in solidarity with Gulf Coast communities who are still fighting Big Oil in thier waters. Our hearts go out to the communities dependent on the marine environment for job and food security, because we know first hand the devastation caused by oil development. When will America realize that it is time to transition our energy and economy beyond dirty fossil fuels to clean energy? It is time for President Obama to declare no new leases in the Arctic AND the Gulf Coast.”

On May 24th, Monique Verdin, will travel to the Shell Annual General Meeting, in the Netherlands, supported by the UK Tar Sands Network to call on the board and investors to put an end to new offshore leases in the Gulf of Mexico in light of this recent spill and the history of devastation in the Gulf.