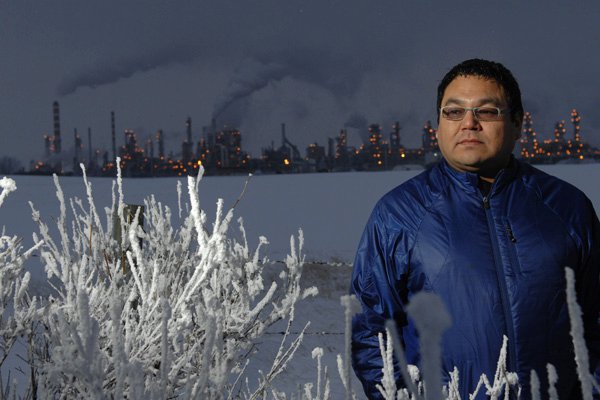 First Nations leader George Poitras will arrive in the UK tomorrow to testify to policymakers and MPs about the impacts of the Canadian tar sands industry on Indigenous Peoples in Alberta, and to encourage the UK to support the labelling of tar sands fuel as highly polluting in the EU Fuel Quality Directive (FQD). Poitras, former Chief of the Mikisew Cree First Nation, will speak in a UK Parliamentary event tomorrow hosted by Liberal Democrat deputy leader Simon Hughes MP, alongside renewables expert Jeremy Leggett and Greenpeace EU transport policy adviser Franziska Achterberg. Whilst in London he will also meet with the Department for Transport, Department of Energy and Climate Change and Deputy Prime Minister’s office, urging the UK government to listen to the science and to support the regulation of tar sands. He has already visited the Netherlands and is currently in France.

At the same time as Poitras’ visit, two Albertan ministers have been deployed to promote the tar sands industry and undermine the Directive across Europe.

“The government of Alberta’s pro-tar sands tour of Europe is taking place at the same time that I am advocating for the EU to take action to stop tar sands imports,” said Poitras, who lives downstream from tar sands developments. “The Alberta government will try to emphasize their efforts on environmental monitoring, greenhouse gas reduction, and investment in alternative energy technologies. However, the truth is that tar sands are devastating First Nations communities and the environment, and having far reaching impacts on the global climate.”

The prolonged lobbying offensive by the Canadian government has already succeeded in delaying the implementation of the Directive for several years. The Canadian government has maintained that the FQD is not based on “science” and unfairly discriminates against Canadian tar sands. It also claims that technical innovations in the industry will cut emissions and reduce the associated environmental footprint. All these claims have been disproved by independent research. Meanwhile, regulation of the tar sands remains inadequate, First Nations are not adequately consulted and spills are lasting for months. The Alberta government also fails to recognise the cumulative impacts of all tar sands projects on the climate and local environment.

The UK government has also been a major stumbling block in passing the directive, arguing along with the Canadian government that the FQD should not make a blanket distinction that tar sands fuel is more polluting than conventional fuel.

Currently the EU imports very little tar sands fuel, but the amount is likely to grow significantly with major pipelines already in development such as the Transcanada Energy East and Keystone XL, and refiners, such as Valero in Pembrokeshire, Wales, preparing to import the fuel. Last week US trade lobbyist Michael Froman joined Canadian government efforts to dismantle the FQD, citing concerns that the directive would negatively impact the US Gulf Coast refining industry’s ability to export fuel to Europe that had originated from the tar sands.

“This EU legislation would label tar sands as what they are: severely polluting and a threat to the global climate,” said Franziska Achterberg, EU transport policy director of Greenpeace’s European Unit. “The FQD would effectively close the EU market for fuels produced from tar sands and make investment in this destructive process much less attractive. The law is not designed to discriminate against Canada or any other nation, but rather to protect the climate, human health and the natural environment.”

Jeremy Leggett, who chairs the financial think-tank Carbon Tracker, and has recently released a book, The Energy of Nations, said, “With climate scientists now 95% convinced that humans are contributing to climate change, there is nothing glamorous about the high-carbon tar sands industry. The IPCC report released last week presented clear evidence, consistent with the research of Carbon Tracker, of the need to identify unburnable carbon, wasted capital and stranded assets in the capital markets. We can now expect stranded carbon-asset risk to become a standard agenda item in boardrooms of companies and regulators alike. Those who invest in the tar sands, or stay invested in the tar sands, are going to be losing an awful lot of money because of all this. Smart politics for the EU would be to run as far away from the tar sands industry as possible.”

The final proposal by the EU Commission, including its decision on whether or not to label tar sands fuel as highly polluting, is due to be released any day now. Member States must receive the proposal by early October to ensure adequate time to reach a position before they vote at the scheduled mid-December meeting. Campaigners are worried that the vote may further slip, as it has in the past, and are urging the Commission to release the proposal as soon as possible.

Take action to keep tar sands out of Europe here.