Today in Washington DC, tens of thousands of people are taking part in the biggest climate rally in US history. They are asking President Obama to move #ForwardOnClimate and, specifically, to reject the Keystone XL tar sands pipeline. The President’s imminent decision will have momentous consequences. KXL is ‘a fuse to the largest carbon bomb on the planet.’

So today we’re asking you to show solidarity with our friends in the US and Canada who are working so hard to stop the KXL and other pipelines being built, by sharing this image on Facebook, Twitter and Instagram.

You can also add your voice to the campaign to keep tar sands oil out of Europe for good, by signing this PETITION against Valero’s plans to bring dirty oil to Wales and in support of the EU ‘Fuel Quality Directive’ (FQD).

Obama’s actions will affect us in Europe too. In order to justify its catastrophic expansion plans, the tar sands industry needs to find new markets to export its dirty oil to. The aim of building the KXL pipeline is to bring tar sands oil down to Texas so it can be exported, and Europe is being eyed up as a key future market. As we recently revealed, US company Valero is currently drawing up plans to bring KXL oil into the UK via Pembroke in Wales. 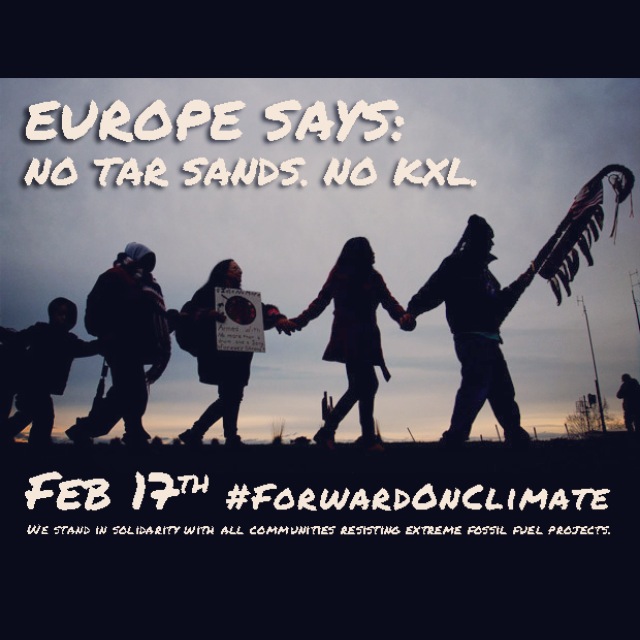 1. ‘Idle No More’ protest in London as movement vows to target tar sands

We were joined by Clayton Thomas-Muller in London last month, for a powerful Idle No More solidarity protest outside Canada House and Buckingham Palace. Get the whole story here.

2. Evidence that Canada’s lobbying on the Fuel Quality Directive may be backfiring?

Friends of the Earth Europe have just published an exposé of the last year’s intensive lobbying by Canada and Big Oil against the EU FQD. But Canada’s High Commissioner to the UK admits that tar sands have become: ‘a totemic issue, hitting directly on Brand Canada.’ Read the report here.

On Wednesday 48 people, including climate scientists, political figures, community leaders, celebrities and NGO directors handcuffed themselves to the White House fence and were arrested, in a high-profile act of civil disobedience aimed at intensifying the pressure on President Obama to reject the Keystone XL pipeline, ahead of today’s rally. Get the full story here.

With love on this solidarity-filled Sunday,