Last week I had the joy of attending Shell’s London shareholder meeting. It’s always a bizarre experience, where the board, shareholders, NGOs and members of frontline communities hurl polite comments back and forth, alternating between some of the biggest planet-altering issues you can think of and various petty technicalities like where the AGM should be held next year.

The meeting I attended wasn’t the actual AGM, but a special presentation and Q&A session for UK shareholders. Unlike the AGM in The Hague earlier in the week, the questions focused much more on the technical and financial issues and less on the company’s myriad human rights and environmental abuses. In previous years Shell has organised a live video-link in London while the AGM is happening so that UK shareholders can interact with the main action in The Hague. This year that wasn’t the case, to much disappointment from shareholders. It was a small victory to hear that Shell’s reasons for not doing so this year included ‘security risks of the presence of demonstrators’, which must have referred to the actions by London Rising Tide over previous years, as well as the protesters outside the meeting this year focused on Shell’s appalling track record in Nigeria. Disappointingly, Celestine AkpoBari from the Niger Delta, who had travelled all the way to Europe to attend the meeting, was denied entry despite holding legitimate paperwork, as was a Rising Tide protester, who was barred for being a ‘known troublemaker’.

What was most striking to me about this meeting, though hardly surprising, was the complete disconnect between the view of groups like UK Tar Sands Network and the Shell board, on every single premise. One of the first questions from the floor set an ironic tone for the rest of the meeting. The question related to share buybacks, and Shell’s answer was long-winded but clearly left the questioner unsatisfied. “I appreciate your answer,” said the shareholder, “but I still disagree.” This got me thinking that Shell is so fundamentally set in its ways that it seems almost pointless trying to communicate any of our concerns. 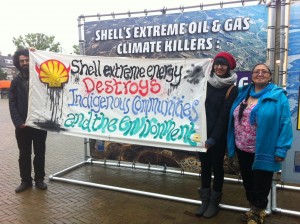 From our perspective, climate change is not just an interesting problem, it is an extremely urgent one. If Shell’s projected future materialises, with fossil fuels still contributing 60% of the energy mix in 2050, it will be too late to stop global temperature rise going above two degrees, and potentially will trip dangerous climate tipping points. We know that tar sands is a major contributor to climate change, and if fully exploited would contribute approximately 11% of our so-called ‘carbon budget’ – what we can afford to emit before reaching catastrophic climate change. We also know that the lights won’t go off if we switch to renewables. There is enough energy to provide everyone on the planet with a decent standard of living, if some fundamental changes are made to how we control and distribute energy.

I’d gone to the meeting to raise the topical issue of Shell’s interference in a key piece of EU climate legislation, the Fuel Quality Directive (FQD). The FQD would differentiate fuels used in the EU based on their lifecycle carbon intensity, and so tar sands-derived fuels would be squeezed out economically by their whopping CO2 value. This would affect the future viability of the tar sands extraction industry, which is projected to double and then triple production in coming decades, hurtling us towards unstoppable climate change. Shell’s lobbying of the UK government to not allow tar sands to be labelled as a high-carbon fuel has been intense, and it transpires, so far successful. Why should Shell, which says it supports government action on climate change, think it is justified in stopping the government taking such action?

It all made perfect sense to me, but Shell’s figureheads couldn’t have disagreed more – we may as well have been speaking different languages. As well as asking a question in the meeting, afterwards I got to have a substantial chat with Simon Henry, Shell’s Chief Financial Officer. We didn’t so much talk to each other, but at each other, occasionally acknowledging the point the other had made but only to counter it.

We never made it to the fundamental causes for disagreement: Should multinationals control our energy supply at all? Should we in the global north consume half as much as we do? Instead we danced around the issues of tar sands, climate change and the FQD.

Henry told me that the FQD is flawed as it will not stop climate change. He claimed that there could never be a system that effectively accounts for all the origins of different crudes. Unlike Norman Baker, the UK Transport Secretary with power to decide the UK’s position on the FQD, Henry did not even acknowledge that tar sands-derived fuel is particularly bad. On the global scale, he told me, tar sands is a fraction of the world’s carbon emissions, and a fraction of the future global daily production of oil. He saw no problem with trying to influence the government – as the FQD is such a flawed plan, why shouldn’t Shell alert the government to the error of their ways?

I countered each of his points patiently: the FQD would allow values for other crudes to be added as they became available, tar sands was indeed a significant contributor to climate change, etc. By the end of the conversation I started to think that this man was seriously trying to do something about climate change, but he was just really, really stupid – nothing I said seemed to be getting through. In reality I know he was spinning the company line, finessed over many decades.

After encounters like this it’s easy to feel that we’re not getting anywhere – but that doesn’t mean we should stop trying. Shell’s PR machine has come a long way, from denying climate change is even happening, to defending its action on climate change during the meeting when challenged by a climate denier. But Shell’s entire business model is, structurally, part of the problem, and will never be part of the solution. We still have a lot of work to do.

So we will continue to have these ludicrously polite conversations with the board and shareholders, but we will also converse through protest, political engagement, public outrage and media pressure, communicating alternative messages that another future is possible. Shell may never join our side willingly, but we hope it will one day be forced to give up its resource dash, realising it has no place in a future of democratised, renewable energy where people and the planet come before shareholder profits.