In a deft, almost dazzling sleight of hand,

In comparison to the new Goliat platform which begins producing Arctic oil from confirmed fields in the Barents Sea next month, Shell’s Polar Pioneer rig is an aged and rickety piece of machinery.

Shell’s Polar Pioneer, the bright yellow rig that left Seattle for the Chuckchi Seas in June 2015 was built in 1985, is 400ft tall and has a holding capacity of 15,063 barrels of oil. 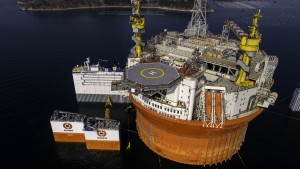 While the Goliat FPSO is a state-of-the-art, cylindrical platform that’s 574ft tall, has a 17 storey elevatortransporting its 120 workers to a cinema, hotel or gym, and a holding capacity of a million barrels of oil. Its mooring lines are the biggest ever made, each 3 feet wide.

In summer 2015, Shell were still only exploring for oil in American owned Arctic territories, whereas ENI, the oil and gas company owned by the Italian government, had long invested in a 60/40% deal with Norway’s Statoil in Goliat, an off-shore oil field in the Barents Sea where oil had been struck in 2000.

The journey of Shell’s Polar Pioneer was full of much gripping drama as its ice-breaker failed and was forced to dock in Portland on July 25 where it was greeted by inspiring resistance. The campaign against Shell by numerous indigenous and environmental groups was loud and successfully gained important traction in mainstream medias and consciousness in conveying the scientific facts plus moral opposition to Arctic drilling.

Meanwhile however, the Goliat platform had already left the Ulsan shipyard in South Korea where it was built, on February 14, 2015. From here it quietly sailed across the Indian Ocean, around South Africa, north to the British Isles and arrived at its destination in Hammerfest, Norway on April 17. Since then workers have around the clock been connecting all the various technical operations eg. the colossal rig is powered, via the world’s most powerful from-shore AC cable, by the Norwegian electricity grid.

On June 5 the Norwegian government announced that it would divest $8bn of its $900bn sovereign wealth fund from coal.

The Norwegian government was also meeting extra budget costs of Goliat oil field explorations, the world’s northernmost development project which sits inbetween the Russian sector of the Barents Sea and Greenland (Denmark). It’s expected to yield 34m barrels a year or 178m barrels over a 15 year period. Or, to put this into wider context, 2 to 3 days of the world’s oil consumption that’s estimated to be at 93m barrels a day.

On African Reuters today (Mon 29, Sept) “There is still some work left to do at Goliat,” Petroleum Safety Authority spokeswoman Eileen O’Connell Brundtland said. “As long as that remains unfinished, the authority will not give its consent, which is required to start operations.” This is in huge contrast to the Goliat insider who announced via the FT online yesterday (Sun 28, Sept) that Goliat platform and production is “there, it’s connected, it’s done. It’s starting in a few weeks”

Oil insiders will reason that the Barents Sea is more temperate, ice-free and a safer place to conduct off-shore drilling but UK Tar Sands Network wants to strongly affirm that sliding to a mindset where Arctic drilling becomes socially acceptable is in direct opposition to the bottom line – in order to remain under the 2degree global temperature rise all Arctic oil must stay in the ground.

Shell may well have announced that they’re pulling out of their Arctic drilling operations in Alaska (less than 24 hours after the FT ran the announcement that ENI’s drilling operations are beginning in the Barents Sea) but UK Tar Sands Network, who stood in solidarity with Arctic nations resisting environmental destruction and fossil fuel extraction in the Chuckchi seas, emphatically repeats the message Ni Ici Ni Ailleurs. Not here not anywhere.