LONDON — Approximately 60 activists, including some from Texas and the Gulf Coast, gathered outside the G8 foreign ministers’ meeting at Lancaster House in London today to tell US Secretary of State John Kerry to reject the Keystone XL tar sands pipeline, address the global climate crisis, and keep tar sands out of Europe.

Over the past month, activists have confronted Kerry and President Obama at nearly all of their public appearances, including an event last week that drew over 1,000 people in San Francisco to a rally outside of an Obama fundraiser. This is the first time a US politician has been met with an anti-Keystone protest on foreign soil. The activists were joined by representatives of Texas and Gulf Coast communities opposed to the pipeline.

Bryan Parras, a resident of Houston, Texas and environmental justice advocate with TEJAS (Texas Environmental Justice Advocacy Services), who joined the UK campaigners at the protest said: “The KXL Pipeline is set to deliver a toxic slurry of dirty oil to communities across the US. If exported to the UK, it could soon start poisoning these shores too. As we have seen from all the pipeline spills in the last two weeks, the delivery of tar sands is too risky and too costly for the communities in harm’s way. Keep the oil in the soil, and just say no to the KXL tar sands pipeline.” 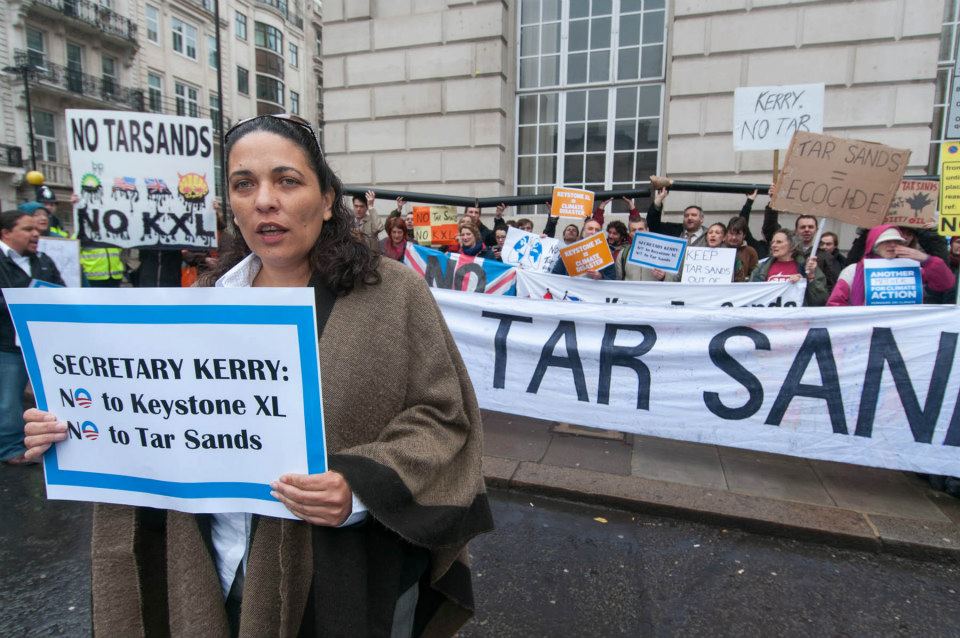 President Obama is expected to make his decision on the pipeline in the autumn. Keystone XL has become a flashpoint in the climate fight. Thousands have been arrested over the pipeline, and on Feb 17 over 40,000 people came to the White House to tell Obama to reject the pipeline.

The pipeline is intended for export, and UK campaigners are concerned that, if it’s approved, imports of tar sands oil into Europe will increase. There is currently a battle raging in Europe over the issue of future tar sands imports. The European Union is trying to pass a piece of legislation to reduce emissions from transport fuels. Known as the Fuel Quality Directive, it would strongly discourage tar sands imports, but lobbying by the Canadian government and the oil industry has seriously delayed it. A vote is now expected in October 2013, and if passed, the case for the Keystone XL pipeline would be seriously weakened.

Ruthi Brandt from the UK Tar Sands Network said: “People in London are here today to stand with those resisting tar sands expansion in Alberta and pipelines in the US. The Keystone XL will affect us too, because the pipeline is intended for export. The reality of tar sands oil coming to the UK is not far off, with a refinery in Pembrokeshire lined up by Valero to bring imports of tar sands from the Gulf of Mexico. So we’re here to let John Kerry know that we don’t want this dirty oil. In the EU we are pushing for legislation to make sure that tar sands imports are strongly discouraged due to their high emissions. We hope other countries will follow suit. We need to leave the tar sands in the ground, and make the transition to sustainable transport fuels that don’t devastate local communities and cost the Earth.”

The protest was organised and supported by: